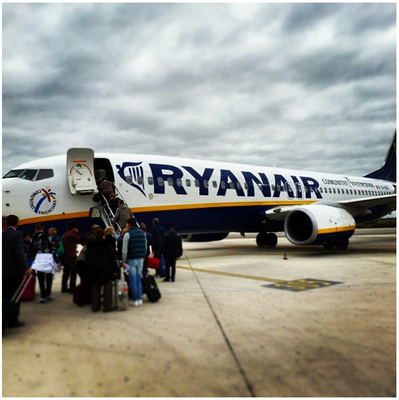 We took a low-cost airline from London Gatwick, a small London airport. Ryan-Air cost us only about 30 pound sterling to come here. If we were to fly from Mauritius directly, it would cost us about $1, 600, so we saved about $1,500. This is our first time going to an arab country and my sister was really looking forward to it. Although language is a huge barrier for me, fortunately she knows enough arabic to help us in any case. She has taken three arabic courses as an elective in University.

Marakkech is one of the most famous cities of Morocco. (In fact, the name of the country derived from the imperial cities- so Marrakech, Fez, Rabat, Meknes). However, Marrakech is also known as either the Pearl of the South or the Red City.

The most popular place to stay at while in Morocco is at a riad, which is basically like a hostel or house. The place where we are staying at is called Riad l'Orangeraie. Like all other riads, it has an interior garden. The word riad is actually an arabic world meaning garden.

Marrakech so far has been one of the most different out of all the destinations we have stopped at. They have a very rich culture and they're very traditional (which reminds me of Peru). Almost everyone speaks arabic, but luckily a good amount of people also speak french, so it's not as bad, because I'm fluent in it, so it's not as hard to understand. The signs are also in arabic and french. Since we aren't spending much time in Morocco, we tried our best to get the less sleep possible. Even though we left our luggage at the riads, we still had to carry our valuables around with us, so it was quite heavy. Having to carry two laptops and one camera around everywhere isn't as fun, especially when we have to put the bag in the front, because it could get stolen or our money too. (Better safe than sorry, eh?!) 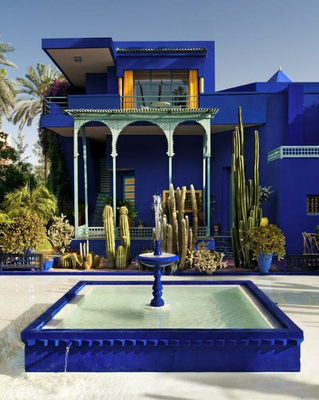 We went to visit le Palais de la Bahia, called Bahia Palace in english. Meaning "The Beautiful" in Arabic, the palace is located near another palace; Place des Ferblantiers. We then went to Majorelle Gardens. It was absolutely pretty, because we saw many unique plants. This garden is one of of the most visited. It actually took forty years for the french artist, Jacques Marjorelle to paint the place, but the architecture is gorgeous. (Success comes from hard work and patience I guess...)

Moroccan lamb tagine with couscous and vegetables, and mint tea

We then went to Menara Gardens. All of these attractions took us the whole day. We ended our first day in Morocco with a lovely and tasty Moroccan dish; lamb tagine with couscous and Moroccan mint tea. (This was delicious!) 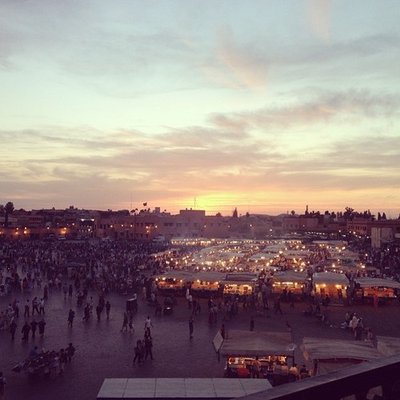 At night, before heading to the riad, we went to Jemaa el Fna. It is a very cultural space and it is very symbolic to the city. Every traveler must stop there! There are many souks (markets) that are everywhere on the streets. They sell various of things; all types of spices (especially), clothing, jewelry, carpets, etc... It is frequented by both the locals and tourists. Here's a tip; always bargain before buying something, there's no point of paying full price or you'll be ripped off. They (the Moroccans also expect you to bargain) 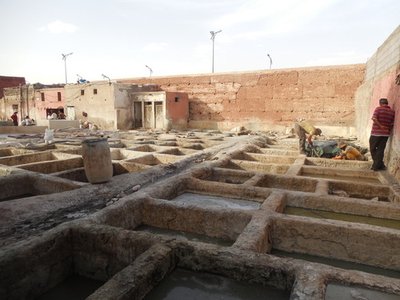 While staying in Morocco, we got the chance to visit a leather tannery. There, we met the girls of the family friend's house where we are going to stay at once we get to England. They were telling about how they were on vacation here, since they have an apartment. So, they told us to come stay over and so we did. (We only had to pay for one night at the riad, but at least we got the experience of that!) The girls were really lovely and this was our second time meeting them. It took us a long walk to get to the apartment, since in the neighborhood where they live, they only allow people to use donkeys or they have to walk.

The girls have been on holidays in Morocco for about a week now and they told us that they're taking the same flight as us, so we got lucky! We didn't know they'd be here, neither did they. We had just told them we were coming to London, so they offered to bring us to their house in Kent, England. What a coincidence. This is great though, because we're not as lonely anymore!