A Day in Canada's European Jewel

We left our car at the Fairmont hotel in Montreal, after saying goodbye to our family, who are returning back to Ottawa and took a coach to Quebec City. It was a 3 hours drive. Quebec City has a European-like feel, due to the streets and the shops. Quebec City is also very historic. The tour that we took includes some of the many sights of Quebec. 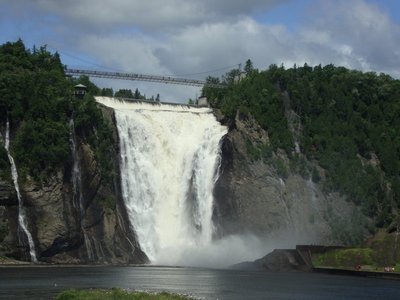 Our first stop was Montmorency Falls. It is the highest fall in the province of Quebec and even higher than Niagara Falls. There was a cable-car, but we didn't take it. We walked to the falls and took many pictures. The thing with group tours though, is that you only have so much time, before the bus leaves.

We then went to the Observatoire de la Capitale, which is an observatory deck that gave us a 360° panoramic view of Québec city. The view was absolutely breathtaking. 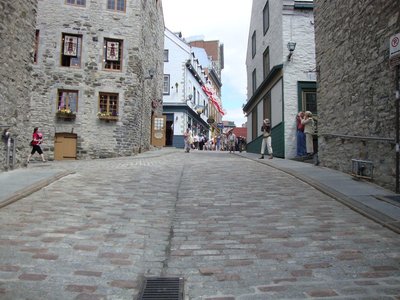 The tour bus then took us to Old Québec City and we got free time for about 2-3 hours. After having a light lunch, we walked around we just wandered around the city.Luckily, since we are fluent in french, it helped us a lot and we didn't have trouble getting around either, so that was a big advantage, since 81.5% of the population speaks french as their first language. 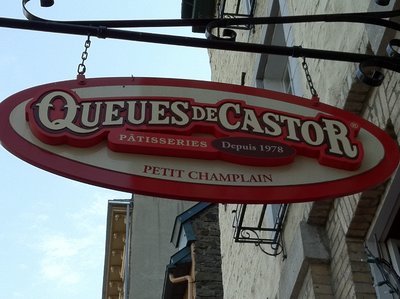 Before getting back on the tour bus, we went to get some beavertails, a fried dough pastry, which originated from Killaloe, Ontario.

Then, the bus took us to the Plains of Abraham, one of Canada’s most important parks. It was there that the Battle between the French and the English took place on September 13th 1759. 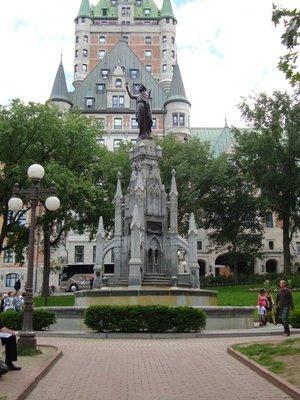 View of Chateau Frontenac and the Statue 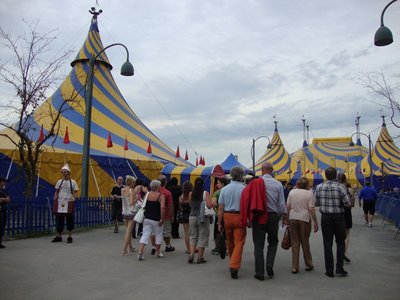 On our way to see Cirque du Soleil

We then walked around some more, and saw various street performers. Then, we went to watch one of Cirque du Soleil's shows; OVO. Cirque du Soleil was utterly worth it. It was very professional and the immense effort the performers put into it were shown throughout the whole show. 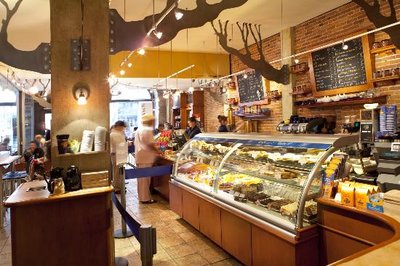 The inside of Maple Delights sweet shop in Downtown Quebec City

Finally, before heading back to Montreal, we walked to Maple Delights, from Cirque du Soleil. It is a shop that sells many different things and they all have maple syrup as an ingredient. Anyone having a sweet tooth? We bought a Maple Milkshake and a maple pastry for the road.

We were surprised to see that the food wasn't as sweet as we thought it would be and that is a good thing, less chance of getting diabetes!

The City of Mary

After a 2 1/2 hours drive from Ottawa, we have reached our next destination. Known as Ville-Marie or The City of Mary back in the days, Montreal is the largest city in the province of Quebec and the the second-largest city, after Toronto in Canada. Ville-Marie is now the name of one of the boroughs in Downtown Montreal. 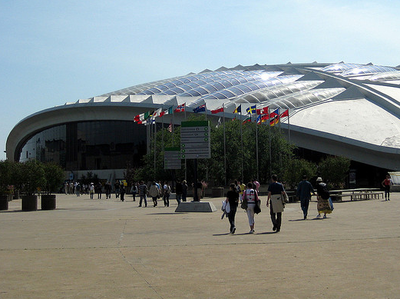 By the time we got here, the rain had gotten worse than when we were on the road, so we decided to stay indoors, so we stopped at the Biodome de Montreal first after having lunch in the car, from what we've packed; sandwiches, pizza, etc. At the Biodome, there was a lot of animals to see; from penguins to fishes to frogs, etc. There was a lot of flora and fauna, which varied from the wet tropical forests, the Gulf of St Lawrence, Newfoundland and Labrador, etc. 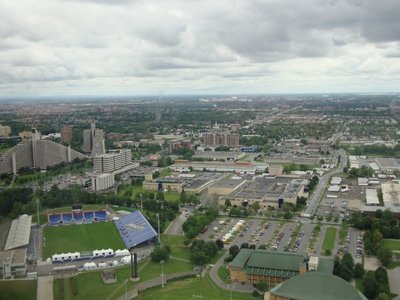 View of part of Montreal from the Tower

By the time we were done, the weather was somewhat better and the rain had stopped so we went to the Olympic Stadium, which is right next to the Biodome. We visited the Montreal Tower, which gave us a wonderful view of the region.

We then drove to Downtown Montreal to check-in at our hotel, Fairmont Queen Elizabeth on Boulevard René Levesque. We got a good deal for 119$/night, which is extremely great for this hotel even if it doesn't include breakfast, as it is usually a lot more expensive than that. 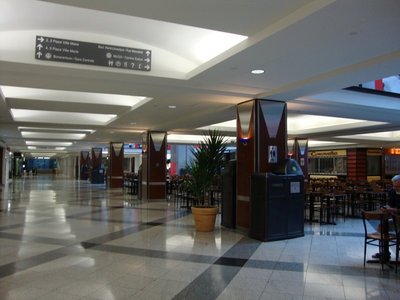 After relaxing for a few hours, we went downstairs to the lobby, only to find that connected to the hotel, there's an escalator that leads to the subway and an underground mall; Place Ville-Marie. So we got some light snacks from Starbucks then walked around the mall. There was a lot of stores and the prices weren't too bad. We didn't do much shopping, we mostly walked around, then went outside to explore around the city. We had dinner at Basha at around 7 pm and then walked around on the St Catherine West, where there was a lot of stores. 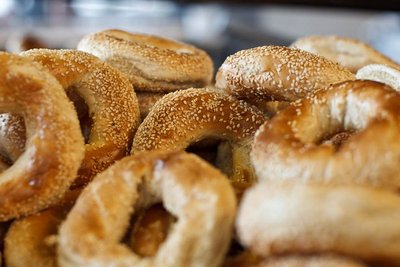 The next day, we visited the Notre Dame Basilica an old church, Mont Royal, a hill on the west of Downtown Montreal. The hill is located between the Laurentians and the Appalachians and the view is superb. Finally, we went to the Botanical Gardens, before stopping for some bagels; simply the best.

While walking around in Montreal, we found the Swings of Montreal, which I found really cool. The 21 Swings is a project, where the swings make music, and if there's other people as well, all blend in together to make the same sound.

Before heading back to the hotel, we went to McGill, and we visited it from the outside and then we went to buy tickets for a one day Québec City tour, which will leave tomorrow morning from the bus station, about 5 minutes walk from our hotel.

We have reached Ottawa at around 8-9 pm last night, which wasn't too bad. We are staying over at our family's house until tomorrow, where we'll be leaving for Montreal together. It was very nice of them to take a day off and offer to show us around in Montreal.

Today, for Canada Day, we left the house, in Gatineau at around 8 am after having breakfast. Canada Day is basically celebrating Canada's birthday, after July 1st 1867 happened and Canada officially became a nation. It was a great idea to come to the Capital to celebrate this, since it's the biggest birthday party in all of Canada. The celebrations are at three sites in Ottawa/Gatineau; Parliament Hill, Major's Hill Park and Jacques-Cartier Park. 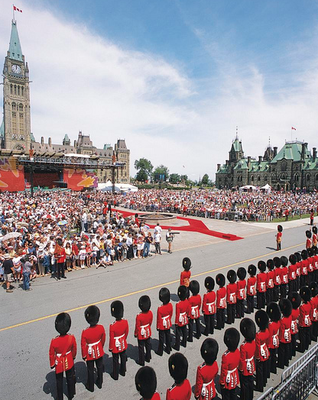 The crowd at the Parliament

We went to Jacques-Cartier park first, since it was in Gatineau. Then it took us about a five minutes drive to the Parliament from there, where we watched the Flag raising ceremony and the Changing of the Guards. Since the Changing of the Guards ceremony finished at 10:30 am, we walked around and looked at the exhibits, kiosks, etc. Then at 11:30 am, we watched the SkyHawks Show (we had to go back to Jacques-Cartier Park for it though). At noon, the Canada Day Noon Show started, with the 21-gun salute and many different cultural shows. There was also a lot of street performers around, so we couldn't be bored at all!

After the show, we decided to stop at Canada’s Biggest Barbecue Event on the Plaza Bridge hosted by President's Choice. We had some lunch, then walked around a bit. Since there is free admission to many national museums and attractions for the day only, we took advantage of that. Inside the Museum of Civilization

We visited the Aviation and Space Museum first, which took us only about 2 hours, so at around 3 pm, we went to Luna Crepes for a snack, then we went to the Agriculture Museum until 4:30 pm. Then, at 4:45 pm, we got in the Museum of Civilization. The free admission is only until 5 pm, which is why we had no time to relax. Even though it was quite busy and there was a lot of walking, it was great to see a lot around!

We stayed at the Museum of Civilization the longest, since there was so much to see. It was really interesting too. At 7:45 pm, we left and went back to Gatineau. We had dinner at home and relaxed until 9:30 pm. Then, left to go back to the Parliament to watch the fireworks at 10 pm. What a day.

...And the journey begins 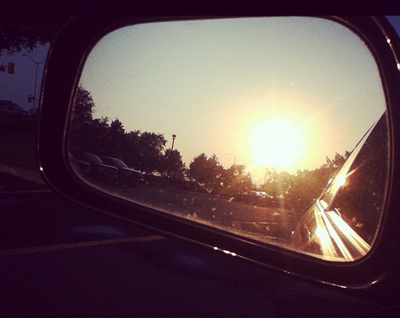 Leaving early for our road trip

This is the beginning of a new life basically; getting out of the old routine, starting fresh again, making new friends, trying something new everyday, discovering new places, etc. I cannot wait to see how this turns out. Our first stop is Ottawa, Ontario, but since it takes a while to get there, we decided to stop at Sandbanks in Prince Edward County, Ontario. 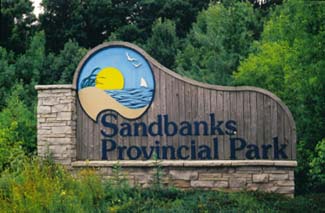 The drive from Mississauga, ON took us only about 2 1/2 hours. We left early, to avoid traffic and to get a good spot on the beach. We've picked this stop, instead of the usual Kingston, ON stop that most people take, since we wanted to see the difference beach-wise in different places. Also, we weren't planning on staying here long, only for the day, so we figured we could stay for a little picnic then continue to our first stop, so we can make it in time for Canada Day tomorrow. 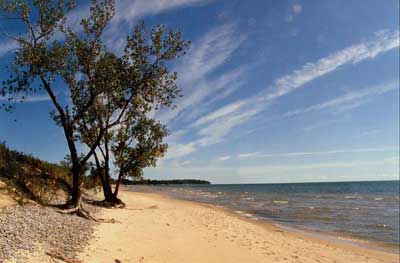 The beach was quite empty when we got there. It's not exactly a real beach like the ones found around the world, but close enough. It was great to be able play some beach volleyball, swim and just relax before going on our long road trip and really hitting the road. Our road trip is only going to end in New Jersey, where we'll then switch to planes.

Here in Prince Edward County, we went to explore around after our picnic at around 3 pm, and we found that there's a drive-in, called Mustang Drive-In. Since we've never been to one, we really wanted to stay, but the movie that was play didn't start until 7:45 pm, so we couldn't, since we have got a 3 1/2 hour drive to Ottawa. That's the thing about traveling I guess, even if you want to do everything, you can't really and there's only so much time.

But, on the bright side, there's always another chance to do something new somewhere else.

(Noun) A strong desire to travel.

Since I was very young, I enjoy discovering new places. I like the idea of traveling from one place to another and learning about different cultures, religions, traditions, etc. I have always dreamed of touring all the countries in the world. I have taken 60 days off of my daily usual routine to visit half the world. Well, not exactly, but close enough, as I will be visiting three new regions in the world.

I was always told that we cannot choose where we come from, but we can choose where we go from there. There are so many countries in the world to visit, yet so little time. I could not choose all of them unfortunately, but I spent a few weeks researching and planning, to decide which countries that I should visit. I have decided that, before I travel the world, I need to learn and see more of my own country, Canada. It is a huge country as it is and it could take the whole 60 days to visit it all.

While planning my trip, I considered the places where I have connections and know locals; as it is the best way to visit a place, the cost, places according to my interests, and safety.

Finally, I was able to plan out an itinerary for my dream trip around half the world for 60 days: